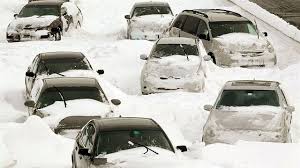 It began with a huge vehicle that stalled out in the developing day off. That minor episode developed into a beast snow-covered gridlock as in excess of 1,000 vehicles got abandoned on an expressway that runs among Tokyo and the city of Niigata along the Sea of Japan coast.

“The snow was very hefty,” one driver said. “As time passed by, the vehicles got covered. I was truly terrified. I’ve eaten the entirety of my food and beverages. Presently, to drink water, I need to dissolve snow I gather in a plastic jug.”

Hefty snowfall lately, particularly in the Niigata and Gunma prefectures, covered a few territories with in excess of 6 feet of day off. These prefectures have seen multiple times more snow than they ordinarily do now during this season.

“I scarcely dozed, and I was stressed in light of the fact that I had positively no data (about the circumstance),” a 48-year-elderly person, who had been heading to his home close to Tokyo.

The line of vehicles at one point extended in excess of 10 miles, specialists says.

For a period, traffic was halted in the two ways. Paths destined for Niigata were cleared by Friday morning, while around 260 vehicles on the Tokyo-bound paths were as yet stuck starting at 7 p.m. neighborhood time Friday.

The East Nippon Expressway Co. said it very well may be Saturday before all the vehicles are cleared.

“I might want to apologize for the broad time of conclusion along the Kan-etsu Expressway brought about by day off, especially for catching our clients for an extensive stretch of time,” organization President Toru Obata said.

Japan’s Self-Defense Forces disseminated food, water, covers and fuel to those abandoned in their vehicles, and worked with digging tools to move the vehicles.

Two individuals were taken to the emergency clinic for respiratory issues and sickness on Thursday.

“The public authority will do its most extreme to safeguard any individual who is stuck in their vehicle,” said the public authority’s top representative, Chief Cabinet Secretary Katsunobu Kato, which announced the snow has taken out capacity to in excess of 10,000 families.